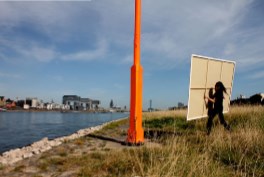 (*1977, Minden / DE) is a Cologne, Germany based video artist working in the fields of video-performance and experimental video. She received several awards and stipends, including project founding by the Sculpture Museum Glaskasten Marl (2015) and the SK-Stiftung Kultur (2013). In 2011 she was awarded by the Konrad von Soest Prize and in 2010 she received the Prize for the best video artist at the Crosstalk Festival in Budapest. Recent shows include “Reset |” at Priska Pasquer Gallery in 2015, The Arte Video Night“ at Palais de Tokyo, Paris in 2014, „Per Speculum Me Video“ at Frankfurter Kunstverein in 2013, the KunstFilmBiennale at KW Berlin and Centre Pompidou in Paris in 2009, Taiwan International Video Art Exhibition at Hong Gah Museum in 2008, the Museum of Contemporary Canadian Art, Toronto, Canada in 2011 and the Japan Media Arts Exhibition at the Tokyo Metropolitan Museum of Photography in 2007.