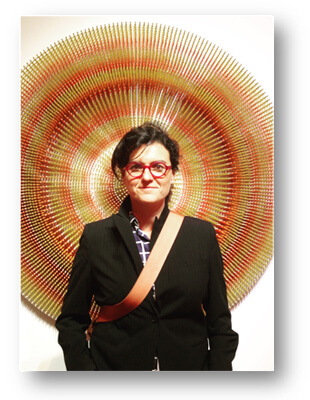 Born in Caracas, Venezuela, 1969. Journalist, cartoonist and artist, working at El Universal, Caracas, one of the most important Venezuelan newspapers.
She has been awarded with several prizes, among which the 2005 Cartoon Prize of the Interamerican Press Society.
She develops also her work in the graphic arts and painting, and graphic humor magazines. She collaborates with the Cartooning for Peace organization and others NGOs.

By the time she is the Editor of The Wynwood Times online magazine.

Mandalas are a spiritual representation and a ritual of the cosmos. It is also a Sanskrit term mainly used as a ceremonial language in Hindu rituals, as hymns and mantras.

They represent the sacred space, the center of the Universe and the focus point. The mandala is represented by a circle inside of a square shape.

In practice, mandalas may be lineal or figurative, from the cardinal axes that project them. You can divide its parts in internal regions of a circle.

For Buddhists, it functions as meditation, however, the most important process for them is the "creation" because is a journey that shows the experience of the designer and is the connection between man and
divinity.

Drawing and painting mandalas is a therapy, it’s a free design and it has infinite meaning.
The graphic artist Rayma, will start us with Mandala 22, a performance with a large-scale, diferent colors, sounds and shapes that will give us a peek into her creative process, making a mix between painting and video.