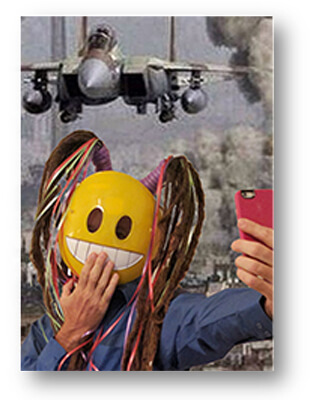 Arnoldo Maal has 25 years career in theatre and performance, with over 20 plays in unconventional spaces and street performances. He has done research as Actor, Play writer, Illusionist, Escape Artist, Special Effects Designer, Stage Producer and Director. He has combined all this with his passion for drawings and reciting pata-physical philosophies. In 1989 he created the Theater Company Circus and ARTO Caracas. These companies have become major references in “street theater” for all Latin America and Europe.

A "Cell-Fish" is an anatomical Socio-psycho-techno-human mutation that appears as a side effect of the communication industry. It is a creature with extremely low levels of self-esteem, which needs the approval of their peers to activate any of its vital functions. Its primary energy is obtained directly from virtual units in several forms: ¨LIKES¨, ¨HA-HAS¨, ¨WOWS¨ and ¨LOVES¨. Until now Science has not been able to explain the high rate of population growth of this specie, since in its entropy, has atrophied the ability to connect with reality, resulting in the elimination of its preservation instinct, ignoring events that threaten their own specie survival. (Text & Drive, Absence of Likes, Pokemones search on cliffs, or deaths due to lack of WIFI).