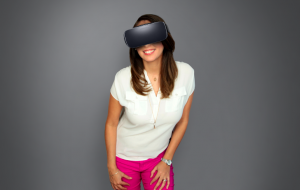 Producer. Originally from Cd. Juarez, Chihuahua Mexico, Liz Pasillas is a passionate entrepreneur, digital film and immersive producer. As a multi-award winning producer, she believes in developing material that speaks to the human experience and instills social change.

A virtual reality docu-short film experience that puts the viewer in the first-person point of view of what it means to leave it all behind. It blends the immersive with actual recounts, and questions our true empathy. This film was created with Jonalex Herrera.