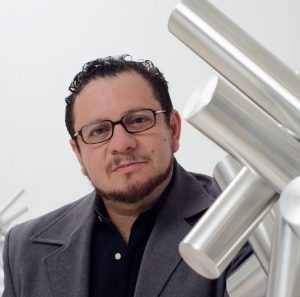 The Industrial designer and visual artist Antonio José García Rico was born and raised in Venezuela. He also studied design management in Madrid.

He started creating conceptual sculptures and art installations in public spaces. He continued working on a project called El Molino, a group of art interventions about territory, public space, and museum. That project was geographically distributed in three valleys.

Light, gas and some liquids are the main tools for his current project, where he is exploring alchemical transformations and their relationship with the human being.

García Rico has presented his art projects at Art Lima, Perú, at the Graphic Art gallery, and at the Contemporary Art Museum of Lima MAC in the exhibition: “The Principle of Emptiness.”

“Tributo a la vaca” (Cow Tribute) is about the water as a metaphor of time and change as well as a transcendent state of existence. The project takes place at the south of the Venezuelan Andes.  It includes the seven interventions called “El Molino: Ephemeral museum”.

García Rico transforms territories as an effect of reality and everyday life. His work disrupts relations of conventionality and meaning, questioning the “landscape” and the work as a timeless unity of its own materiality.

As part of the Curatorial Program #3, “Tributo a la vaca“, by Antonio José García Rico will be at the following venues: