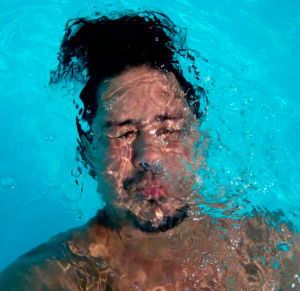 Eliseo Solís Mora was born and raised in Venezuela. He earned a degree in Visual Arts from the University of Los Andes and currently is a professor at the University of Carabobo. He works on curatorial projects since 2008.
Solís Mora uses performances to explore the body as art and symbol. He has participated in exhibitions in Argentina, Chile, Colombia, Cuba, Finland, Germany, Mexico, Spain, United States.
Since 2011 he organizes the video show “Video en Acción,” alongside with Yacanna Martínez.

“Ofelio” by Eliseo Solís Mora for the #MNMF2018

“”The symbolization of water as an origin, active principle and in this case death, is a dichotomy of the cycle that I pose from the appropriation of the name. Here my body merges until it is lost, perhaps joining with nature until the total transformation of my body. It is an apology to water and our relationship with the vital liquid, a new awareness of a water being.”

As part of the Curatorial Program #3, “Ofelio“, by Eliseo Solís Mora will be at the following venues: