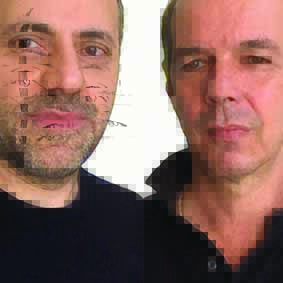 Khalil Charif is on the right

Khalil Charif was born in Rio de Janeiro. Lives and works in New York City and Rio de Janeiro. In late 90’s, studied at Parsons School and New York University. Afterward, he obtained a post-graduate degree in Art History at PUC-Rio (among further studies in Art-Philosophy). Recently he accomplished the Advanced Programs of the Escola de Artes Visuais do Parque Lage, in his hometown. He was one of the recipients of the awards: “Prêmio Interações Florestais 2011” (Brazil) and “ExperimentoBIO 2013” (Spain). He participated in several exhibitions and festivals, including: “Dublin Biennial”, Ireland, 2014; “24es Instants Vidéo”, France, 2011; “Triennale of Contemporary Art”, Czech Republic, 2008; “Rencontres Internationales Paris/Berlin/Madrid”, France, Germany, Spain, 2007-2008.

Interlacing elements of time and space, producing an experimental dialogue between images and sounds starting from nature – and through it – this video is oriented by the gesture, using different angles of the same spot (an environmental reserve). “Astro rei” & “Tupianas” were created in collaboration with Marcos Bonisson.

As part of the Curatorial Program #3, “Delivery”, by Khalil Charif will be at the following venues: